A Brief History of the Township

Conewago Township was formed in 1801 from portions of Heidelberg and Manheim Townships. The original name of the area was “Digges’ Choice,” bestowed upon it in 1727.  In 1730, the Lillys’ family settled here and gave the Township its Indian name, Conewago, meaning “at the rapids”.

In 1821, a stone hatchet was found by Miss Mary McCleary in the rear of the Conewago Chapel, on the old John McCleary land, and on the site of the Old Indian Wigwam which stood there when the Whites first came.  It is said that the first missionaries of the Catholic Church held the first Christian ceremonies in the county.

Little Conewago Creek forms the whole south and west line of Conewago Township.  McSherry Creek, now called “Plum Creek,” is a native stream, rising in the ore hills in southeast districts and flowing in a general northwest course to its confluence with the Little Conewago on the Devine Farm.  The Blue Spring near Conewago Chapel was founded over a century ago by one of the Jesuit Fathers and is said to be a bottomless well.

Conewago Township is an integral part of both Adams County and the greater Hanover Region.  Cooperation with the surrounding areas is essential to provide the best possible services within the economic limitations of a small but growing Township. 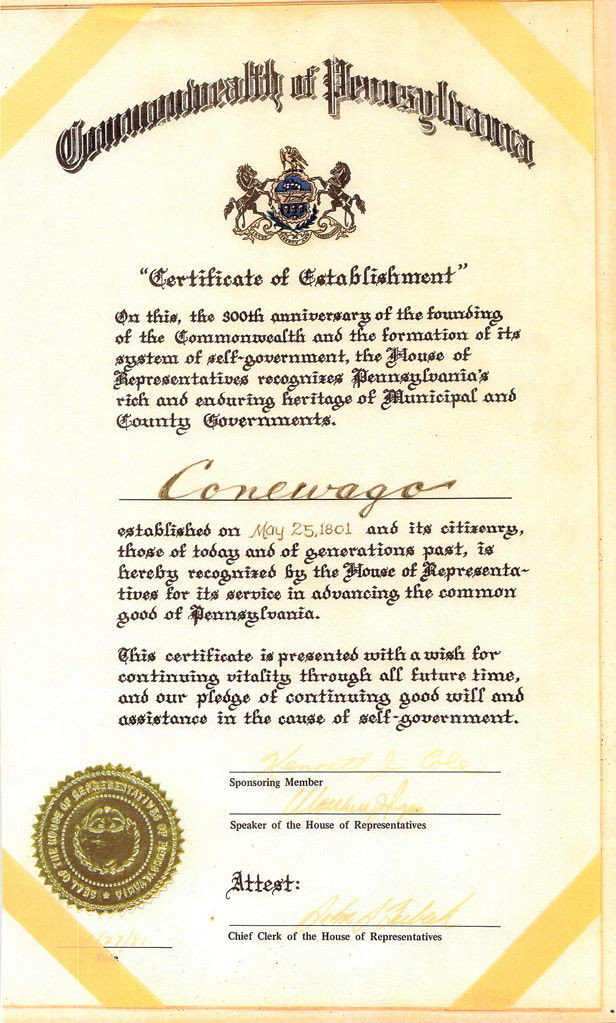